Honoring a Life with Dignity & Compassion

History of the Home

History of the Funeral Home at 231 Falls Avenue in Wabash

When Jon McDonald purchased his business he also bought a historical landmark.  The house at 231 Falls Avenue has long been recognized as one of the community's finest homes.  Designed by a Springfield, Ohio architect named Hoagg, the house was begun in 1881 and finished in 1884 for a wealthy Wabash businessman, George N. King.  Since that time the house has been known as the "King house."  The three-story structure is a classic example of excellent craftsmanship and workmanship found in finer, late nineteenth century homes.  For George N. King, the house was truly his castle.

King was a member of a Wabash County pioneer family.  He was born in Summit County, Ohio, in 1833 to Mr. and Mrs. Peter King.  Along with his family, he moved to Wabash County when he was eight.  The family settled on a farm about a mile and one-half southwest from Wabash.

By 1847 Peter King had built a grist mill on the Mississinewa River near the old town of Mount Vernon.  He ventured into other businesses such as buying and selling wheat, shipping the grain east on the Wabash and Erie Canal.  In 1858, he built a steam flouring mill in Wabash; the mill was converted to a furniture factory two years later.  He also owned and operated mills on Eel River at North Manchester and on the canal at Wabash.

George N. King followed in his father's footsteps to become one of the county's leading businessmen.  In 1855 he moved to Wabash to help form the Bruner, Haas and King hardware business.  His association with the business is remembered today in the name "King and Hipskind."  King retired from the hardware venture in 1876 when he and J.W. Busick and Thomas McNamee organized the Wabash County Bank, the forerunner of the Wabash National Bank.

Financially secure, George King began to plan for the house he would have built at 231 Falls Avenue.  In 1878, King made a four-month-long tour of Europe. While touring Italy, he commissioned Italian stonecarvers to craft ornate, carved marble fireplaces that would soon grace his Falls Avenue mansion; fireplaces that remain today in the home.  Six years later, when workmen completed the King house, George King, his wife Maria Malone-a Dublin-Irish immigrant from Lagro-and their two children, Nellie and George Jr. moved in.

In 1889, Nellie married Wabash attorney, Will Snavelly.  As a wedding present, George King had built for them the house still standing next to the McDonald Funeral Home at 247 Falls Avenue.  The Snavellys had a daughter, Phoebe.  When George N. King died in 1897, the Snavellys moved into the King home with Maria. Phoebe was raised there, and would one-day own the home her grandfather built.

Phoebe married Don Wilson, Wabash. He was a representative of the Latchem Paving Company. Wilson was also a nephew of a famed author Gene Stratton Porter.  Phoebe Wilson became secretary to Gene Stratton Porter. And Porter is reputed to have spent one winter living in the King house. The house is depicted in Porter's book, White Flag.  The Wilsons lived several years in the South, returning to Wabash, where they were divorced.

Phoebe lived in the King home until her death in 1950.  During her lifetime, the King house was the scene of many lavish and elegant parties and dinners Phoebe was noted for.  When Dale Eddingfield bought the house from the Phoebe Wilson estate in 1953, he recognized the importance of keeping the house in as original state as possible.  As a result, in 1956, Eddingfield saw the need for an addition specifically designed for the funerals.  In 1957, he appended a large brick addition to the home's east side.  Thus, the McDonald Funeral Home was then and continues now to represent a blend of the old and the new.

"Since it was finished 126 years ago, there have been only four owners of the house, George King, Phoebe Wilson, Dale Eddingfield and myself."  "I am proud of the condition of this landmark house and of the specially designed, equipped and furnish home." 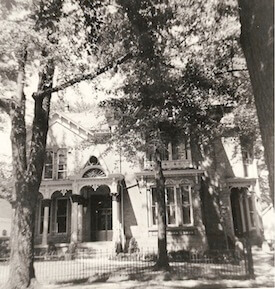 History of the Home